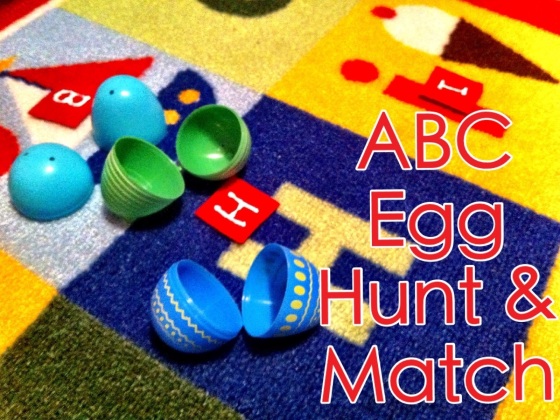 We had a BLAST with this easy ABC activity. I filled Easter eggs with letters A-Z, hid the eggs then let the kiddos hunt them till all were found. When the eggs were all accounted for the kiddos would open them and match the correct letter to the letters on our playroom ABC rug. If you don’t have an ABC rug you could use flash cards instead. The kids loved it so much they couldn’t wait to do it again!

1. Number Sort: excavate all the numbers and sort them in order.
2. Go Fish: With a magnet wand fish for the numbers. To keep the number you must correctly identify it or it gets tossed back into the bin.
3. Number Hunt: Seek the invisible numbers.
4. Find & Trace: Once a number is removed from the bin you must trace the number on the correct tracing card.

Hot Glue, Invisible Numbers via I Can Teach My Child

They are so fun in the bin 🙂

We love getting out our deck of Old Maid cards and just playing with them. Truth is… we have NEVER actually played Old Maid with them.

Here are 5 different ways we play with them at our house:

1. Matching: We shuffle our cards, spread them face down then take turns flipping over 2 cards at a time trying to find a match. (Remove Old Maid Card)

Play w/ Old Maid Card: If a player turns the Old Maid over they get an extra turn that round. Be sure to remove the Old Maid once it’s been found.

2. Memory: For this memory game I take 8 pairs of cards that match from the Old Maid deck, split them up into two decks making sure that there are no pairs in each deck, then I place one of the decks in a particular sequence. I let the kids analyze the cards for a bit then I stack the deck back up and they use their deck to make the sequence of cards that I made. This can be very tricky at times, but if it gets easy for your child just add more pairs of cards to your deck to add more difficulty. (Remove Old Maid Card)

3. Sorting: Our Old Maid cards consist of different poses from all the Disney princesses so my girls greatly enjoy when I shuffle the deck and let them sort the cards into different piles of each princess. (Remove Old Maid Card)

4. Slap: We use the whole deck for this game, but remove the old maid card. Before we start we decide which princess we want to “slap” (wow, that sentence sounds harsh!!!). I then shuffle the deck and deal the cards one by one until the deck is gone. One of us lays down a card in the middle and we take turns until the princess we agreed upon is laid down then we must slap the deck. Whoever slaps the deck first gets the pile of cards. The winner is the person who ends up with the most in their “slapped” pile.

Play W/ Old Maid Card: You can also slap the deck when the Old Maid has been turned over AND steal another player’s slapped pile.

5. OLD MAID: Play it like your supposed to 😉 That’s on our bucket list for the week IF I can talk the kids out of playing the other “games” we play with our Old Maid cards!

This little activity was so simple to put together for the girls this morning.

I gathered a variety of objects varying in difficulty and traced their outline onto a piece of paper. The girls found this to be a very fun activity to be timed. I made 2 separate outline papers; easy and hard. 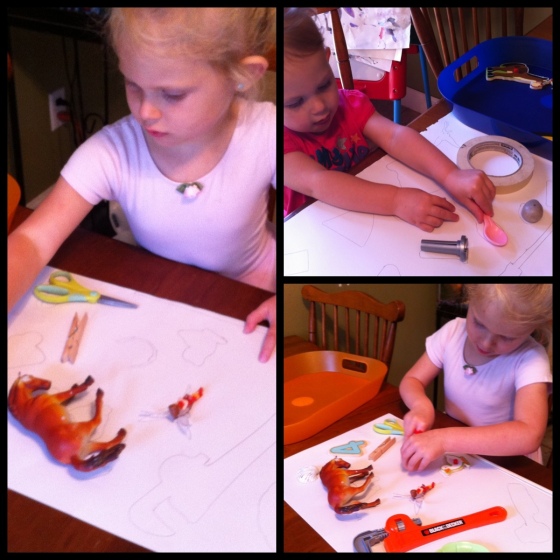 After the game became quite “easy” after several rounds Little Miss and her Auntie M challenged each other for a race against the clock. The giggles from these two were hysterical considering the simplicity of this activity.

After lunch Little Miss will use the outlines to practice cutting skills!